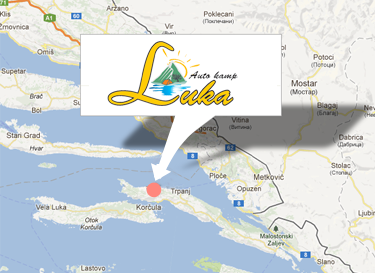 Pelješac is a peninsula located at the southern part of Adriatic Sea of Croatia, nearby Dubrovnik. From its junction with the mainland through the final cape of Lovište is 65 km long. Pelješac is 348 square kilometers and is connected with the mainland on his narrowest part of 1450 m near the Ston which city walls were built in this area to protect the interests of the Old Dubrovnik Republic. There is also one of the oldest salt factory in Europe, which is still in use. The pleasant climate that is special blend of pure mountain and sea air and beautiful nature are ideal for camping. Average hours of sunshine on the peninsula is over 2500 through the year, reflecting the large number of sunny days. Climate and location have caused that on the peninsula grow a lot of medicinal and aromatic herbs: mint, rosemary, sage, lavender, marjoram. In addition to the rich flora there is rich fauna: jackal (Canis aureus dalmaticus), is a specific type, which is spread out on the peninsula. A large number of wild animals such as Mouflon, wild boar, rabbits, pheasants, and in particular one comer of Asia - Mongoose (Mungus Nung). What makes peninsula a truly special are the picturesque vineyards that are dotted on the rocky hills in dense Mediterranean vegetation. Best red wines, Postup and Dingac, are produced here and is worth visiting the local wine cellars who are just 20-30 minutes drive from Camp Luka! The best olive oil is produced on Pelješac and can be purchased from locals in Duba too.

Duba is situated in the northwestern part of the Pelješac peninsula. Staying in Duba is special experience of original fishermen and coastal location. Traditional Mediterranean architecture will bring you back to the history. Also there are whole series of caves in Duba , which is believed once have been inhabited. The old Gothic church on the shore and the remains of the ancient walls of the "  rustic villa" from the Roman era, and carved troughs for livestock in the monolithic rock with canals to collect water, from the time of the Illyrians, are evidence of continuity of life in Duba region. In the shade of olive trees, tranquility and peace of this little corner of paradise is located Auto camp Luka.